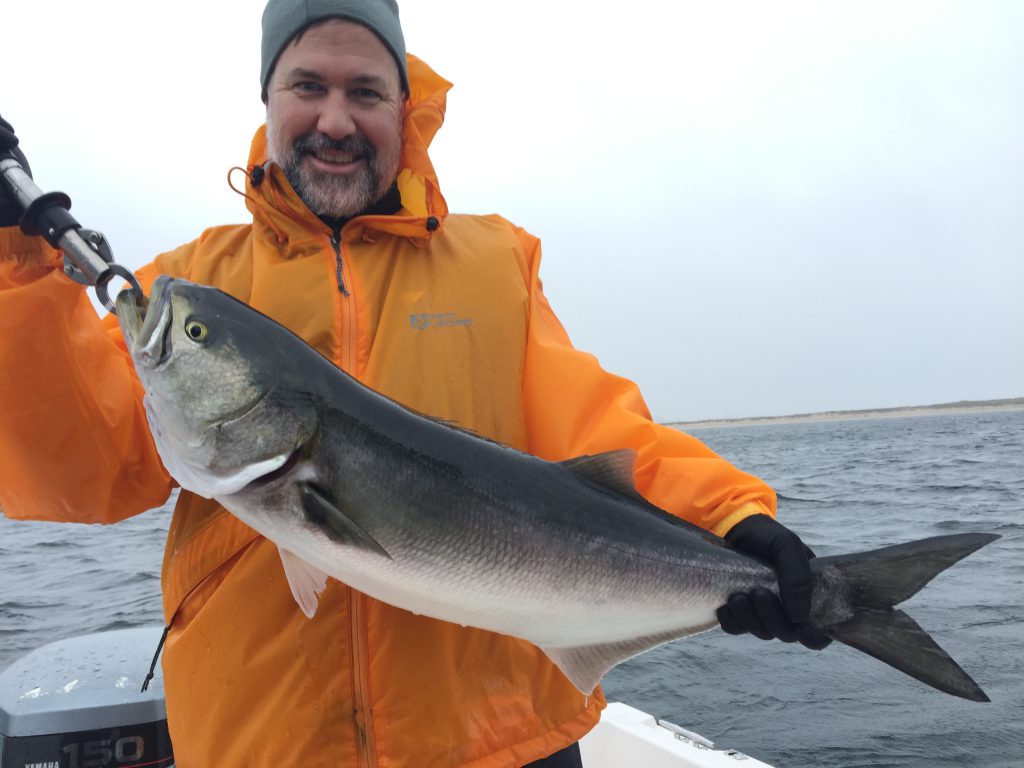 I started fishing Cape Cod in the fall 30 years ago.

My father and I had camped – illegally, as it turned out – on a Provincetown beach where he had recently discovered the fishing was good.

The tent we brought was missing the poles I had neglected to replace after a night in the woods with some buddies, so we crawled into our sleeping bags under the stars. I was comfortable. My father was cold.

When the ranger rolled up on us the next morning my father accepted the ticket for sleeping on the beach after a half-hearted attempt to argue that we might have been just taking a break from fishing and offered her a cup of coffee as the sun rose in the sky, warming his body and his mood. We caught some fish; there’s a photo somewhere of me holding up a schoolie.

Fall is the best time of year for a lot of reasons, especially on Cape Cod. The crowds and traffic have thinned. Although the summer’s mild southwest winds can turn to a more biting northerly and easterly direction, it’s a turn of change and potential that is welcome. The beaches are as often empty as not and the fishing can be very good. Maybe not always as good as the stories but sometimes better.

It’s a time of memories for both fisher and fish alike. It’s the thrill of the fall run.

Fish fatten themselves up for the long swim south and readily take poppers on the surface or dark deceivers in the pre-dawn hours while fishers rush to don waders and get in on the action. Stripers and bluefish are landed and lost, false albacore and bonito join the party (and now even more exotics, like Spanish mackerel can be found on our doorstep) and the warmth of a campfire or a sleeping bag after a day of casting in sometimes miserable conditions becomes a blissful bookend to a morning cup of hot coffee, and the sound and smell of sizzling bacon and frying eggs. I have spent days fishing in the fall when I have been soaked so thoroughly that it feels I’ll never get dry. Back at camp, I’ve readily shoved my feet so near the fire the bottoms of shoes have melted. At home, the wood stove doubles as a dryer for boots and clothing draped as close as possible short of creating a fire hazard.

But when the bite turns on, comfort takes a back seat to adrenaline. Stripers, large and small, again smash flies and lures tossed from shore in broad daylight. I once spent a fall afternoon off Long Point in Provincetown with waves rising next to the boat that were filled with angry bluefish and a sky filled with birds, the line between the two blurring to a point of erasure. A wave came over the bow that filled the boat with a foot of water and I had to yell more than once at the other guys onboard to convince them that bailing was more relevant that casting for the time being.

Fishing in the spring may be hot but the fall run is the fuel we need to get through the long winter. It’s a time when we realize time is short. Today could be the ‘you should have been here yesterday’ day. The blitz could come at any moment and if you’re home watching TV or futzing in the garage you could miss it for at least another year and maybe longer.

Walter Payton once said – paraphrasing a proverb – that tomorrow is promised to no one. That is a hard truth to swallow but important on many levels. Our fish, for the most part, are passersby, transient if long-staying and welcome guests along our shores. Even more reason to take good care of such visitors. We want them to remember their time here and return just as we do for another year of making memories, sometimes the hard way.

The fly lands, the strip begins, conversation ebbs and flows with the tide, and then water jumps into the cool air and the line moves. The set and the run. The memory of the line and the mind become elastic. The flash of 30 years disappears in a blink and I’m holding another schoolie for the camera – it doubles as a phone now – and another smile imprints on my face.