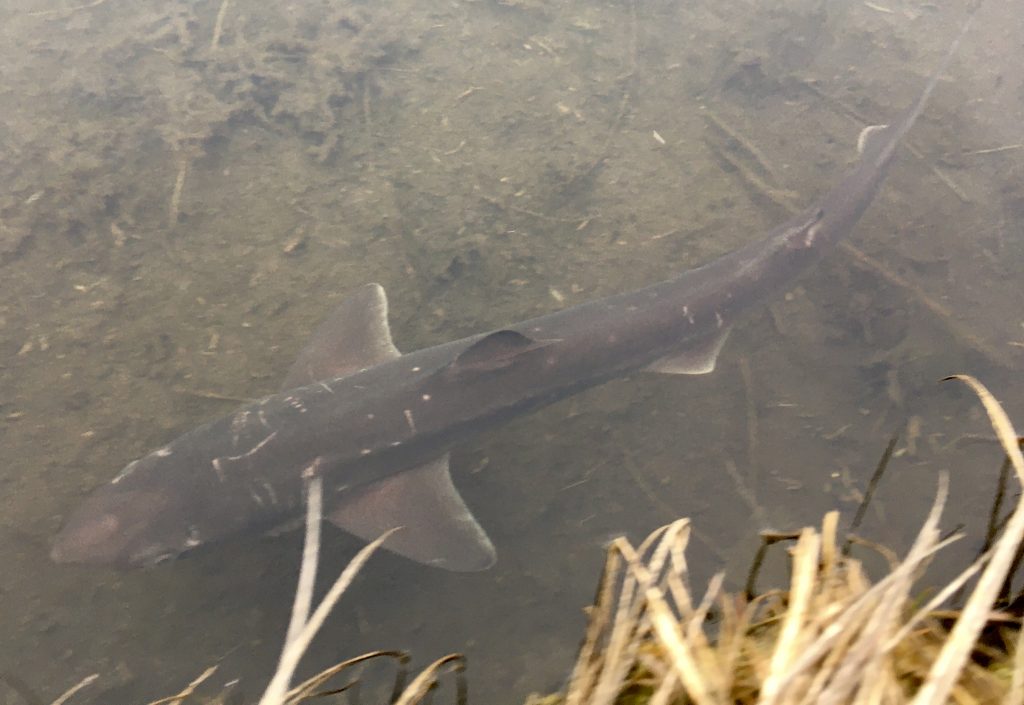 I caught myself telling a fish story the other day.

It was from a time last year with a client wading the flats. (You guess which one.) We had left the boat and walked in one direction for a half hour or so. We saw no fish. None.

We walked back toward the boat where it was anchored on a corner covered by high tide. As we neared the stern I glanced down into the brown, sand-infused water and almost bumped into an armada of large stripers. Some split around us, some turned. I held up my hand but it was futile. They didn’t spook completely in the cloudy water but the school knew well enough we were there.

There were others, on the corner about 50 feet off the bow of the boat. It was a spot where I had found them before, milling and flashing, but these fish were different. They were huge. I got on the bow, anchor line still attached and pointed them out, calling out casts.

The client tried. I tried. I watched their bodies turn, silvery sides showing through the suspended sand. The client worked the sides of the school. I climbed down and brought him another fly, returned, climbed back up, climbed back down with another offering. We burned through the box. He cast ahead of the fish, worked carefully, tried the sides, eventually putting flies right on top of their heads. He let flies sink, stripped slowly, stripped fast. The fish stayed in place. They rolled. They were immense. If the ones we had seen earlier were more than 30 inches, these were another foot, and 40 pounds. And some were larger. They all had lockjaw.

We were running out of time. The tide was moving. The fish were slowly breaking up. In those last moments I saw a giant metallic body turn. Again. And, again. The water was a muddy brown and I couldn’t say for sure, and still can’t, but it looked more metal and platelike than any striped bass I had seen. Instead, it reminded me of a trip with a friend a few years earlier to Puerto Rico where we watched giant tarpon porpoise in the early morning light while fishing on the island nation’s lagoons. We caught smaller versions. Our guide at the time said the big ones weren’t biting.

Back on Cape Cod several years later we were forced off the flats with the receding water. Much later I mentioned to a fellow guide my fantasy of seeing a large tarpon mingling with striped bass. I knew they had come up not too far south from us but couldn’t believe they were here. He matter of factly said, yes, tarpon had been seen in that area before and one had been caught from a nearby jetty. My fantasy was now my fish story. Is it true? I don’t know. Does it matter?

That day on that corner is one I’ll remember regardless. Like much of our lives it was not a destination but rather one of many turns in a journey. This includes the journey of fisheries policy, which has taken up much of my time over the past several months. It includes the journey of cleaning up our environment and the waters on which we play, work and depend, another topic that has drawn more of my attention recently. It includes the journey we have been on over the past several years as a nation and a planet, politically and climatically. We have arrived at a corner in our journey through a pandemic. Spring and the season to come will hopefully provide a view of the other side. We have also arrived at a corner in our ongoing (and likely never-ending) journey toward social and racial justice. Like the corner where my fish story began, these corners are potential inflection points.

Last season was busy. Lots of people came to Cape Cod to escape and to fish. Many bought second homes or moved fulltime to properties they already owned. One census tract on Cape Cod was among the top five areas where people moved during the pandemic. The popularity of fly fishing appears to continue apace as well. I have spoken to many potential clients who are either trying the sport for the first time or transitioning from a freshwater background to the salt. As I say to everyone who comes to me as a novice, I’m happy to teach them the basics on the water but they are paying for a guide, not casting instruction. I warn anyone seeking casting help that they may be better off starting on dry land with a certified instructor like my friend George Sylvestre. Not only is George knowledgeable in how to best teach casting, he’s a great guy to boot.

George is one of the many people working in this industry who I have come to respect. I spent many mornings and nights this winter listening to and watching some of the best. The amount of resources that currently exist for someone getting into fly fishing for the first time is mind blowing. A few that come to mind are events held on Zoom, Facebook and other online forums by Masters of the Fly and South Shore Fly Casters. The amount of information available through podcasts such as the American Saltwater Guides Association’s Guide Post, Peter Jenkins’ Saltwater Edge (also the name of his shop in Rhode Island), and Billy Mitchell’s Seven Stripes Fishing podcast is ridiculous. I had the pleasure of talking with Billy a month or so ago about the season that was and the one ahead of us. He is a pro but the danger of two guys who love talking about fishing quickly became apparent; how do you stop?

One resource that is sadly no longer available is Rob Conery’s Fishing Around column in the Cape Cod Times. Rob has moved to his cabin in Maine where he is still writing and fishing, just different. I met Rob at the Cape Cod Times and we became friends over those same activities. Rob is a writer’s writer, talented and unique. Think of a cross between Hemingway and Hunter S. Thompson but with more holes in his shorts. I’m looking forward to visiting and fishing with Rob in Maine. He left classy with a column full of thanks. It’s a loss for the Cape’s fishing community but a good move for Rob, who is already working on his next venture, which I’ll share more information about later.

With that, let’s take a quick look ahead at what’s to come or as Rob would write it, “What’s going on?” Water temperatures have been cool this year but the fish are arriving. There are reports of stripers, presumably migrating schoolies, in the Cape Cod Canal and off Martha’s Vineyard. As I write this, a cold front is moving over us. I got out last night (before the front) for some casting along a particularly fishy shoreline with some friends. We saw some bait and a small dogfish trapped in a tidal pool waiting for the water to come back up. It swam in circles. No corners but I got a photo to prove it existed. This next week will be telling. I fully expect larger schools and larger fish to move in from the south and spread across our region but there’s only one way to find out: Get outside. Walk toward that corner and make your first casts. Live your own fish story.