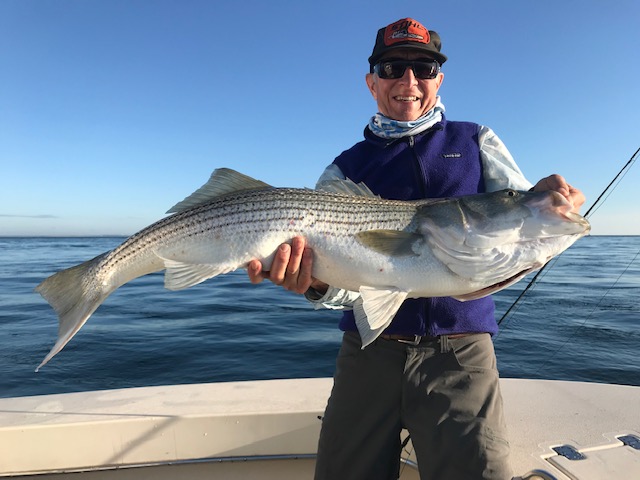 Everyone has a confidence fly, until it isn’t.

It may be a pattern you use repeatedly. Maybe it’s more than one of the same fly. Or an individual fly that can never be replicated. Maybe it only lasts a day, or maybe it works for a year. If you’re lucky it lasts longer than that. We have all had them and we’re always looking for the next one.

In July, a regular client and his good friend had a good day. We found a pile of bass that stuck around for hours. Doubles over and over. Not huge fish but big enough. It was so good Jacque’s friend Scott cheered when he broke a rod he had for 25 years on a fish. At one point, I caught Scott purposefully trying a long distance release. “I just want to cast again,” he said. The 14-foot great white breaching several hundred feet off the bow was icing on the cake. “I’m still trying to figure out what just happened,” Jacques said later. About the shark, not the fishing. (The shark was presumably chasing the same fish we were after.)

Scott was using his confidence fly, which he dubbed the Haggard Clouser. That’s all it was; a beat up clouser he knew would keep the fish biting. Clousers, in particular, seem to get better with every strand of hair pulled off the hook, which of course raises the question of why fish can be so picky but not care about a metal hook when it becomes so naked it’s barely anything but the hook. Whatever the reason, a confidence fly is unbound by such questions. The reason: you are throwing and retrieving it with full faith that fly will catch a fish so long as there are fish to be caught. That confidence is transferred into casts and retrieves. There is no timidity. The rough edges are smoothed by comfort. Accounting for weight and line, the fly travels through the air and water on the perfect trajectory and at the perfect depth in the water column; you know from experience exactly where it is in time and space.

Success may simply be achieved through an inherent use-based sampling error. The fly is used, ergo it will catch more fish than the one left untouched and dry in the box. We all have boxes filled with flies we’re always hoping will gain our confidence but never do. We’re either fooling the fish or fooling ourselves, sometimes it may be both. Anglers, after all, are always trying to create the illusion of real life. Big fish, meanwhile, are playing their own tricks, including disappearing acts right next to the boat.

Andy ties magic flies. Last year, he shared plenty of his magic. One fly in particular caught fish early and often. The first of the year was mid-May on a shakedown of a new radar system. I was alone and thought it would be a bonus to hook a few schoolies at the same time but it was early.

A dark spot on the shoal caught my attention. It was a pile of big sand eels, like 6-8 inch big. I took a single false cast and dropped Andy’s 6-inch chartreuse and white clouser on the other side of the pile. It dropped. I stripped once or twice and the next strip was a hard set. The fish ran and then ran some more, into the backing and then some. The 8-weight rod flexed as I gained ground and the fish sounded. I pulled it one way and then another, using angles. It was not a schoolie.

After a good fight that included maneuvering the boat while working to raise the fish, I had her just under the gunwale, the magic fly in her lip. I reached down and lifted her with two hands. A quick measurement and she was back in the water. Another lift and a photo to prove to myself as much as anyone that I had landed a 40-inch bass with the season barely underway and she was revived and released, swimming off after the tell-tale chomp, spine pop and swipe of her powerful tail.

I breathed deeply and wished I could reverse time. The magic fly lay on the deck, transforming as I regained my feet into the Magic Fly. Throughout the rest of the season I would reach for it – Andy provided a quiver of them so it wasn’t always the same exact fly – whenever it appeared other flies weren’t doing the job. It was especially productive in high light on the edges of deep water and extremely shallow shoals. Of course the best fishing is also the worst spot to operate a boat in many cases, which makes it even more important that you have the right fly.

The Magic Fly fooled many good size fish, including a few more in the slot and another 40-incher late in the season, this time for another regular client. There were times I worried about losing confidence if by chance a client didn’t hook up with the Magic Fly at the end of the line. But the magic held, except for those moments the fly disappeared altogether, presumably when a bluefish nipped the tippet. So maybe posting this today is appropriate. When better than Halloween to post about illusions, disappearing acts and magic?