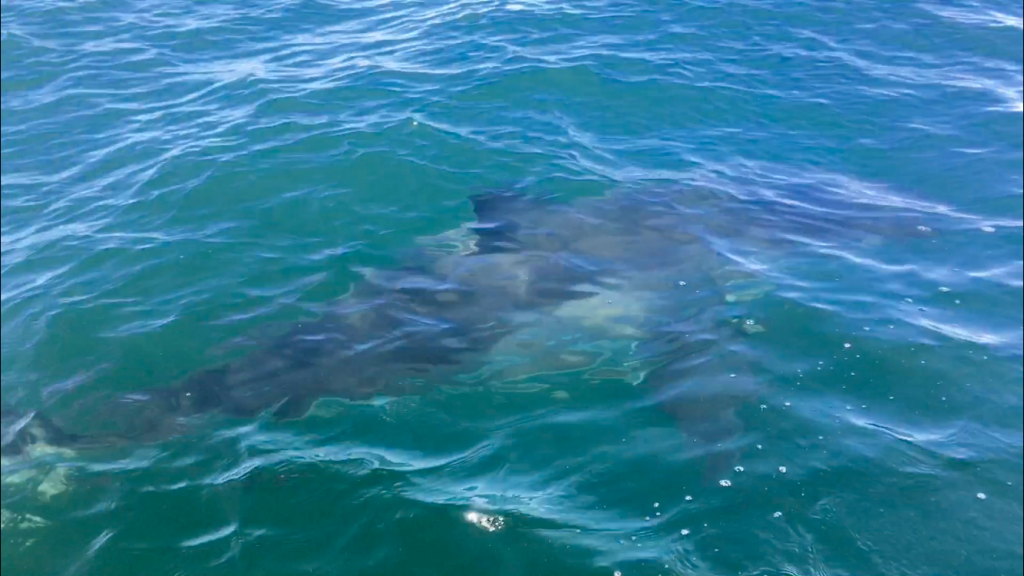 After several hours off Monomoy chasing gannets and blips on my sonar without so much as a nibble, I headed closer to shore near Bearse Shoal where something white was floating in a calm spot of water north of the No. 8 buoy. The day before I had a friend onboard who took a 14-pound bass in the area and I hoped maybe late season lightning would strike twice.

I kept fishing. When I got close enough, I realized the white something was likely a seal’s head.

The decayed and eyeless head looked like it had been divorced of its body for a while. Short waves rushed the nearby shore. A little ways off, rafts of eiders dove and bobbed stubbornly back to the surface.

I cut the engines to take in the scene.

I spent a lot of days in the area over the past several months. I had fished the flats and rips around Monomoy plenty before but nothing like this past year, my first as a professional guide.

The seven-mile stretch of sand, grass and shells divided into several individual islands is a terrestrial bird magnet surrounded by a maritime lodestone for fish. When the fishing is good, there is no separating the surface and what lies beneath. Birds dive from on high and under the water while fish rocket to the surface and into the air. And on an early November morning, with only two other boats in sight on the far-off horizon, it can be a beautifully desolate place.

Months ago, it would not have been so isolated, with scores of fishing boats drifting and navigating through the fast-moving waters where the Atlantic Ocean clashes with the sloshing, often confused seas of Nantucket Sound. That confluence, with its contrasting water and air temperatures, draws the bait: squid, sand eels, and pogies to name a few. The birds, striped bass, bluefish, false albacore and other fish follow. Seals too and larger predators.

Years ago, the nearby land would have also been relatively crowded. In the 19th century there was a settlement called Whitewash Village near Powder Hole – then a harbor open to the sound – at the southwestern end of Monomoy. The fishing and shipping port must have been a wild place and survived into the 20th century and even after the harbor was closed by shifting sands.

Like the rest of the Northeast, the area has always been home to seals in lesser and greater numbers. Most people know the story at this point. A bounty system and other factors knocked back the population for a time but it has rebounded in recent years, due in large part to the Marine Mammal Protection Act.

There were also always various types of sharks. I’ve seen a few  in the area and with the burgeoning seal population, the numbers of great white sharks – with all their baggage inherited from cinema, myth and sometimes fatal reality – have also skyrocketed.

In 2011, I was onboard the Ezyduzit during the early days of the ongoing and highly successful great white tagging effort by shark scientist Gregory Skomal.

At the time, the idea of a great white shark fin slicing through the waves was still something researchers and commercial fishers said happened primarily only in the movies. Most likely any such sighting was a harmless basking shark they told me during the trip to an area off Monomoy informally named Shark Cove.

But when I pointed out the fin that had popped up in the glare behind the person I was interviewing the crew sprang into action. A spotter pilot confirmed it was a great white.

On several other trips on my own boat off Nauset I spotted great whites finning the surface but water clarity and the time of day made it difficult to see much more.

Perhaps my most dramatic sighting of a shark was on a 2013 trip with my friend Tommy.

We were just inside Monomoy Point and Tommy had been fighting a string of bad fishing luck so when we stumbled on schools of bluefish feeding in the standing waves and he hooked into one it seemed like a good omen. We could still see the fish with the popper in its mouth behind the boat when an eight-foot shadow shot in from the left. The shark shape was unmistakable.

The shark took the bluefish and the line started screaming. Tommy and I looked at each other and he said something like, “I think I got this.” We both probably knew he didn’t. The monofilament line snapped and the shark made off with Tommy’s lure and fish. It is unclear if it was a great white but at the time we thought not.

Recently, great white sharks have become more prevalent in Cape Cod Bay, similarly taking fish from charter boats and even being spotted deep on the flats where I like to wade, although not as deep anymore.

So, although it was not my priority, I expected to see some sharks besides dog fish this year. Early in the season, I heard a report on the marine radio about a great white that cut a seal in half on Bearse Shoal as I was fishing nearby Stonehorse. But the bite was hot and I was uninterested in pulling stakes at the time.

Still, although I saw plenty of ocean sunfish – with fins that are often mistaken for sharks – whales, and dolphins, after nearly 100 trips to various spots, I hadn’t seen a great white this year. Not that they weren’t around at times. I had fished from shore along the Outer Beach from Nauset to Provincetown and, on several occasions, an hour or two after leaving the surf a shark was spotted munching on a seal near the same spot. In one such case, my friend Ed and I had both backed out of the surf after getting a “sharky” feeling.

But this past week it was much more than just a feeling.

A small whale broke the surface nearby. Although they gather in large numbers a bit farther to the north and west, whales aren’t common sights near the tip of Monomoy. It was a welcome intrusion on an otherwise quiet day.

When the water swirled again behind the boat I quickly realized it was neither a whale or a large bass. It was a shark.

I reached for the GoPro that is always clamped to my T-Top but it was gone. After years of use, the arm had snapped on the way out that morning. I had heard the sound about half-way between Saquatucket Harbor and the shoals. It even prompted me to slow and scan the deck but I didn’t see anything and powered up again, imagining I had maybe bumped a small buoy.

I grabbed my iPhone instead and flipped to video as the large shark circled the boat toward the bow. I got there just in time for it to swim under the boat but I caught it on the other side, scarcely a man’s height from my feet. I could almost feel its mass pass beneath me. Seen from above, the animal’s breadth was astounding. It was clearly a great white.

The giant fish swam off and I lost it in the opaquely darkening water.

Without knowing where I might find it again, I returned to fishing, already satisfied the trip had been worth it. I drifted away from the seal’s head and lost track of time for a bit.

So, a half-hour later my eyes landed on two fins on the surface near the shoal and slick where the seal’s head had been floating. Despite being several hundred yards away (yes, at least three football fields) they stuck out from the water like giant sickles. The massive shark was on the surface.

I motored toward it, hoping to find it again. But after I cut motor it felt more like the shark found me. It swam toward the stern, crossed swiftly toward my starboard and then turned again, giving me several views of its large body. It then settled in languidly only a few feet off the stern and port quarter, providing a straight-on view of its doormat-sized head. I subconsciously backed up a foot and then ran through my options if it took a bit from my transom. It is rare for sharks to attack boats but I prefer to be prepared.

After seemingly sizing me up but more likely being entranced by my electronics or motor, the predator purposefully drifted backward and turned back toward deeper and darker water.

The encounters probably lasted only two minutes all told, but time moved like the shark, quickly at first before slowing to near stillness. The water had been clear and it is hard to imagine the shark had not at least sensed me, perhaps the same way I sensed it when it traveled under the bow. I have no idea what it wanted. What it gave me was equally ambiguous.

It is clear, however, that the presence of megafauna such as sharks is a gift. It is a gift with challenges, especially for those who recreate in ocean waters, but that is the enduring conundrum of conserving and living in a natural world.