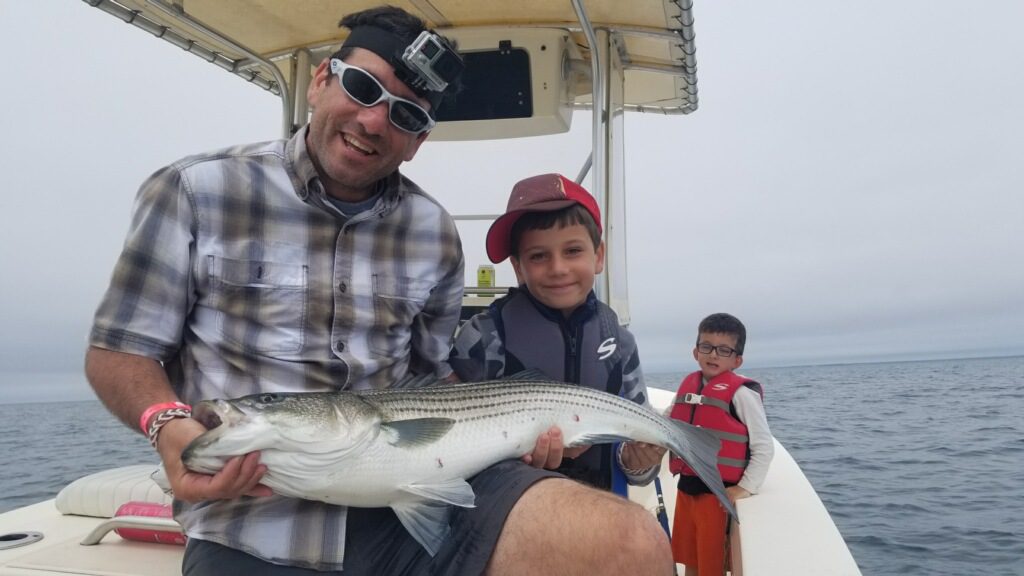 Like the successful release of a hooked fish, time has a way of reviving connections once thought lost.

Raf is one of those people I haven’t seen in years but knew in the best of ways had not changed. We went to college together, hung out with the same people, were friendly rivals for the same girl and seemed to always get along. Still do.

He has been coming to Cape Cod for years but it wasn’t until last year that we started to talk about getting together while he was here. Raf has two young sons he obviously adores and the three of them were visiting again this year. I suggested fishing. I would likely be out anyway and, as I wait for the last piece of paperwork from the Coast Guard to take on paid bookings, they fell nicely into the “practice clients” category.

It is always good to reconnect on the water.

We met on the Eastham side of Rock Harbor. With the boys onboard, I checked the weather one last time to make sure thunderstorms predicted earlier had indeed moved off and tried to manage expectations – both theirs and mine – for a cruise or a fishing trip and hopefully a little of both.

Raf looked the same as he had in college. His bright smile and congenial attitude had stayed the test of time. After a quick hug, a brief intro to the boys and a chat about safety, we were on our way. Although dark clouds hung low on the horizon, the bay was clear of any serious rain or even the patchy fog forecast for later in the afternoon.

Leaving the harbor, I explained the “clam trees” and oriented my passengers to the sweep of land around them, highlighting geography they might know from a terrestrial bearing, such as Skaket Beach and Wellfleet Harbor. “That’s where the drive-in is,” Raf told the boys.

Clearing the channel, I asked if they wanted to go fast somewhere. The answer: of course.

We headed west toward where the charter fleet and a few smaller boats were milling around an area I had already suspected would hold fish. Sure enough, the sonar lit up with the curved shapes of fish up and down the water column.

I set the boys up to jig a bit with light tackle and then we settled into trolling with the rest of the disparate congo line around us. We also settled into talking about life, growing up – or not – and older, and a rudimentary sketch of our lives since we had last seen each other. The youngest boy asked questions about the boat and the older one showed off a pretty decent cast. I told Raf how I came to the Cape, left, came back, got a job, met my wife. Fishing with them reminded me of growing up fishing with my father, and the influence those times had on the trajectory of my life. Would one of Raf’s sons be one day touched by nostalgia when the smell of low tide was heaviest, distracted by birds on the far horizon or thrill to the sound of breaking fish in the dark? Maybe, maybe not, but hopefully they would walk away from our trip with a memory of time on the water with their father, like a curled fishing line they could strip off the reel when needed.

A rod tip bent. Raf picked it up. When the striper broke the surface we could see it had some size to it. As it was pulled to the side of the boat, its girth became more apparent. No cow but keeper length and powerful. A pretty fish.

I held her in the water after removing the beaten bucktail-festooned swimmer fish love for its side-to-side action. It is among those go to lures I’ve had for at least as long as it had been since Raf and I last saw each other. After a quick hoist from the water for a photo – the youngest boy kept his distance for fear the fish might seek revenge on its smallest perceived tormentor – I revived her beside the boat. Her bite showed she was ready and I pulled my hand from her mouth. She slipped down into the clear but dark blue water and was quickly gone.

There were a few more hits, including at the surface and more fish to be had if we waited out the tide but the future benefits of time on the water was an advanced lesson for a later trip. We headed in, stopping briefly so I could demonstrate fly fishing and slowing at the harbor’s entrance for the requisite “greatest small-boat rescue in Coast Guard history” story as we passed the 36500 at its berth on the Orleans side.

As we said our goodbyes, the memory formed around us and, like our catch, it felt as though something had been given new life.