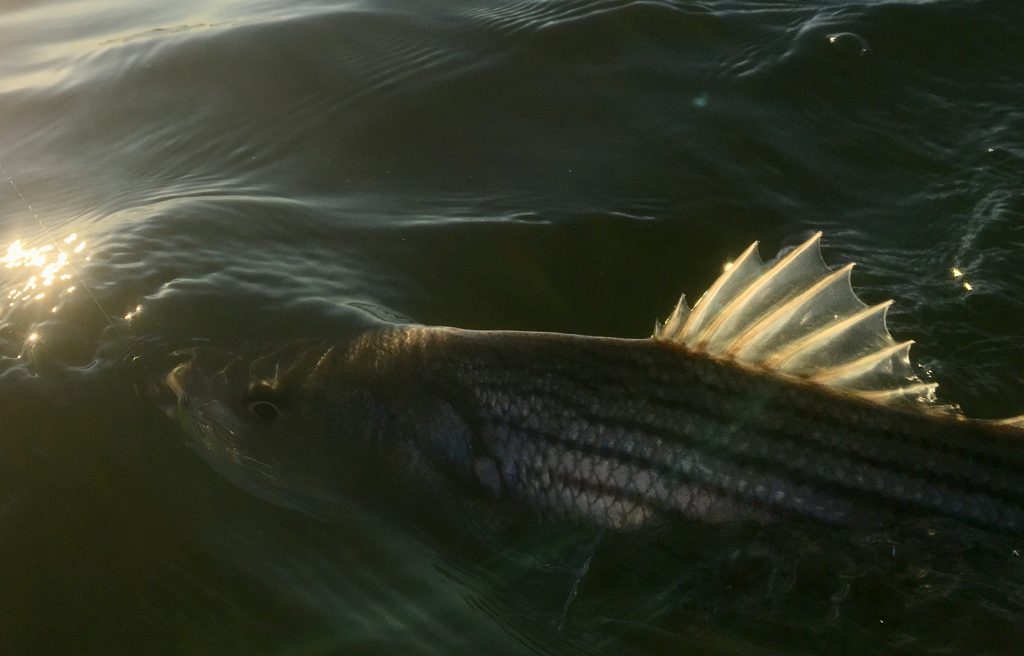 Striped bass are overfished and I’m part of the reason why.

This past season there were three fish harvested on board my boat, two striped bass and one bluefish. Although I typically purposefully kill even fewer fish in any given year, this isn’t any given year.

Striped bass are overfished and overfishing is occurring, according to the 2018 benchmark stock assessment released earlier this year. Adding insult to injury, the striped bass young-of-the-year survey results announced in October were dismal at 3.4 versus the 66-year average of 11.6.

But release mortality – a major talking point that came out of the stock assessment – is why I’ve decided to make Cape Cod on the Fly a catch and release only operation. The simple reason: I don’t need to have fish killed to make a living or put food on the table for me or my clients. A longer explanation follows.

Of the fish caught in the recreational fishery and then released 9 percent will later die, according to estimates. While that figure may not sound high, in absolute terms it adds up to millions of fish. The recreational harvest is far larger than the commercial harvest even if release mortality was not so high.

And, while the use of circle hooks has become the de facto answer to address the problem, regulators are fond of saying it is impossible to account for a decline in release mortality as a factor in regulatory decision-making. When it comes to striped bass, that decision-making has fallen short in any event.

It’s important to further explain the reasons behind my personal decision, which I did not take lightly. This has been and will continue to be a learning process for me.

Most of my clients fly fish and most of those don’t keep the fish they catch. Many of them looked at me like I had three heads this past season when I said they were allowed to keep one fish over 28 inches which, thankfully, makes this decision a bit easier. This upcoming season, in reaction to the assessment’s conclusions, the bag limit has been changed to one fish between 28 inches and 35 inches – a slot limit – coastwide. I was in favor of making the limit one fish over 35 inches for various reasons I won’t get into here but those are the current rules.

The focus on release mortality has been heralded by some as a reason to go so far as to ban fly fishing, the argument being that it takes more effort to get a fish to hand and the fish is further exhausted and endangered by it. Let’s be clear: fly fishing is hard work and typically requires more effort per fish hooked. Most fly fishers work to get the fish in as quickly as possible and in many cases never even remove it from the water, another primary factor in catch and release mortality. This is easier done when wading, which is the preferred approach for many fly fishers.

In addition, I don’t know a fly fisher who won’t spend as much time as necessary to ensure a released fish has the greatest chance possible of survival. If you believe all fishing is cruel, then all fishing should be banned. If you are a charter guy who just doesn’t like fly fishing but who thinks you should be able to take as many fish as you want, then get over it.

Bait fishing methods often damage fish that may be pulled up from the depths with a hook in their gut. And lures with treble hooks can do damage to a fish even when they don’t get hooked in the mouth. I’m not saying people shouldn’t be allowed to fish with bait or lures, just pointing out the difference between a 1/0 or 2/0 single hook fly and the alternative. Some of these issues are being addressed.

There are rules going into place to require circle hooks when using bait to fish for striped bass. Circle hooks can save fish that would otherwise be deep hooked, which accounts for the vast majority of catch-and-release mortality. It might even be argued this will address the problem but considering there still isn’t even a plan to rebuild the stock, I don’t think it goes nearly far enough.

You could contend that by going all catch and release I will be increasing the catch and release mortality. Yes, I understand the math but it will also increase the number of fish given at least a chance – and a good one with proper handling and a quick release – to survive. On the boat, my goal once the fish has left the water is to get the hook out, measure it and get a photo for the client in 45 seconds or less. For proper release techniques, watch this video. I also debarb my hooks to make them easier to remove and will be replacing all treble hooks with single hooks on lures for my light tackle clients.

I don’t necessarily fault anyone for wanting to catch and cook a fish. The fact is I eat meat and hesitate to throw stones on this front, especially as the provenance and effect of beef and other forms of meat may likely be more detrimental to the overall environment (methane, transport costs, packaging, etc.) than me taking home a fish I caught myself. Unfortunately, I think the idea of catching a meal may be more appealing than the process for some people and the fish will sometimes end up partially wasted or in the freezer until it’s useless. I won’t claim total innocence in the second failing, although many people would be surprised how far I’ll go to make sure a frozen fish is eventually eaten. I generally don’t take fish myself anymore and when it’s given to me and I have to freeze it, I try to eat it as soon as I can.

I will say that I felt comfortable trusting the clients who took fish with them this past season were people who were used to catching their meals and adept at its preparation and use, limiting any concerns for waste.

Still, when I look at the concern for striped bass populations and what I can personally do, a catch and release policy coupled with proper handling makes sense. If you’re a potential client and that’s not for you, there are other guides you can hire and I wish you both well. If you’d like, I can even recommend a few. Let me also be clear that this is selfish. From a business perspective, the more fish in the water, the more fish available for my clients to catch, the happier they are when they walk away.

There is an exception to the new policy: If a fish appears likely to die anyway for some reason, I will harvest it for either the client to take or for myself.

Bluefish are a slightly different story. Their population, too, is overfished but overfishing is not occurring, according to a 2019 assessment. The difference is that, while the stock is below a certain threshold, it is not currently being taken in such numbers that it can’t be rebuilt. Even so, the Mid-Atlantic Fishery Management Council, which manages bluefish stocks, recently recommended and the Atlantic States Marine Fisheries Commission approved reducing the bag limit for recreational anglers from 15 to three with a five fish limit for anglers onboard for hire operations like mine. I always thought 15 was ridiculous and unsustainable as a recreational limit anyway so it’s a move in the right direction no matter what. We haven’t seen the numbers of bluefish around the Cape in recent years as there used to be but the species is highly cyclical so it’s a little hard to say why. It seemed like there were more this year but given they are overfished, reductions appear appropriate. It probably doesn’t help that when there aren’t striped bass around, bluefish are the go to backup plan in most cases.

I am not going to enforce a strict catch and release policy for bluefish but will continue to encourage releasing them and limit the number taken onboard to the lower catch limit of three per angler. I would be surprised if anyone took me up on that figure.

Both of these policies could change as future conditions warrant and I will let potential clients know if and when they do. In the meantime, thank you for understanding and feel free to contact me with any questions. I’m happy to talk more about the reasons for my decision either by phone or during a trip. Until then, tight lines.