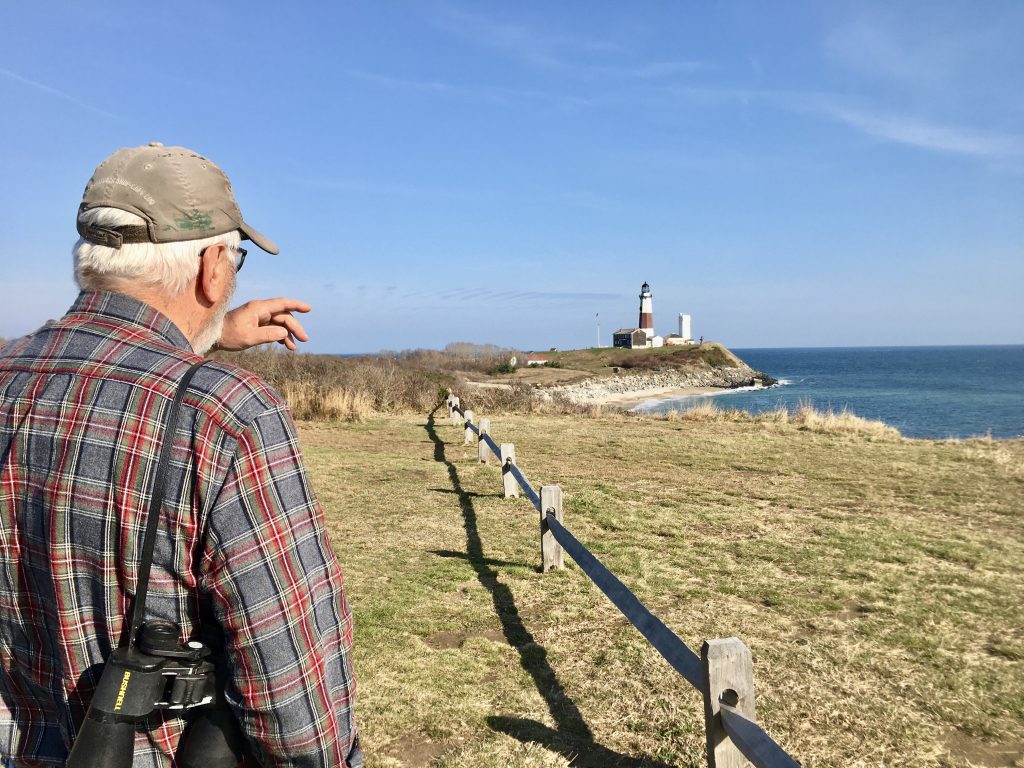 My memory of Montauk begins before I was born.

Men lined shoulder to shoulder, taking their turn casting into the night, my father among them.

At half the age I am now, he stood in these places, fishing in my future memory. I had never stretched a line there, had visited as a child on family vacations I’m told, and know it only through stories.

So, when he called me to ask if I was interested in a November trip to his old casting grounds, I said yes almost before he could finish speaking.

For him, it was a homecoming of sorts. He had learned how to fish on Montauk’s beaches and rocks, and while standing on the bars as fish held the edge.

For me, it was a pilgrimage. Growing up, I believed Montauk is where fishermen were born.

But it was also a scouting mission. I needed the lay of the land. We knew the fishing had slowed for the season but it was now my business to explore such places. A good excuse in any case.

To say Montauk is famous for fishing understates the facts as much as fishers are known to overstate their catch.

It is mecca. The colliding currents of Long Island Sound, Block Island Sound and the Atlantic Ocean were manifest during our visit in the hundreds of birds dive bombing the water just off the point, tantalizingly close but too far for casting, especially a fly line into an onshore wind.

Although my knowledge of Montauk started with stories told by my father, it had been supplemented through books, articles, photos, art, videos and conversations with other anglers, especially in recent years.

John Cole’s seminal work, “Striper, A Story of Man and Fish,” provides perhaps the best description of the area’s heyday.

From the post Civil War fishing clubs to the first surfcasters swinging tin lures from hand lines overhead to post-World War II technology-inspired equipment, Cole describes the development of the sport in his typically poetic simplicity, including the sometimes deadly hazards of the casting piers of Montauk Point and the experience of the men like my father who came later.

“When he is driven from his casting spot by exhaustion and chill, the surfcaster often must take his rest on the beach, must learn to live with the grit of the sand and the shelterless plain that provides no hiding place from the wind,” Cole wrote. “And, because the striped bass is primarily a nocturnal feeder, the surfcaster must also endure darkness as one of the standard fishing environments.”

The copy of Cole’s book I have was given to my father by my mother for Christmas in 1978, the year it was published. The author’s description of surfcasting Montauk could have been drawn from the stories my father had shared with me and my brothers.

The picture Cole paints of the charter fleet at Montauk and estimates of its effect on the country’s economy and on the fishery itself are equally descriptive and reflect an underlying theme about the origins and evolution of the striped bass fishery: its limitations.

At the time, the 100 charter boats homeported at Montauk Lake were worth $1 million, total. It’s hard not to notice boats presently tied up in various harbors up and down the East Coast worth far more than $1 million, each. Cole extrapolates from the amount of fish taken by one vessel of the Montauk fleet to describe what can be seen today in any robust fish-heavy Instagram feed; an anecdotal front for data showing the effects of our activities on the very thing that feeds our body and soul.

The backdrop is Montauk. Like Cape Cod, it is a buffer between land and sea, sometimes embodying one and sometimes the other. Stripers are a coastal species, at home on that line, struggling and thriving in the surf where earth and ocean collide. The men – primarily but not exclusively it is men – who fish its waters are tough as metal leader, at times obstinate in their obsession and often made stupid by their machismo, as men are in many places where they find themselves tested and wanting.

I am as guilty as others but not this trip.

From New London we drove my father’s camper onto the ferry bound for Orient, a much shorter and simpler trip than I had imagined. Montauk was always farther away in my mind. The waters, however, were theoretically familiar – I had studied the pertinent charts for my captains exams – but it was dark; there was little to see beyond the rails on the way over. Another 80 minutes or so, with a stop for dinner along the way, and we were at Hither Hills State Park, a peaceful and linear grid of campsites tucked behind a small dune on the Atlantic.

After a brief detour to Montauk Point to determine our camping options when arriving after hours, we returned to Hither Hills and chanced a morning reprimand for setting up without permission, a move reminiscent of the time my father and I crawled into our sleeping bags on a beach in Provincetown nearly three decades earlier. This time around we had a camper roof over our heads and knew we could correct the ledger the next day.

The next morning I woke early and walked over the dune to the beach. It was cold. Even with waders and neoprene gloves, my fingers were soon numb as I enjoyed my first session casting from the shores of Long Island. The sun came up and my father joined me. Birds traveled from along the beachfront but there was no other life in sight.

Without sign of fish we returned to the camper to warm up with a breakfast of eggs, sausages and coffee.

We packed up a short time later and headed toward Montauk Point, passing through the town itself, my father’s recall remarkable as he pointed out where Johnny’s Tackle Shop once stood or the still-standing Montauk IGA, where he and my mother once shopped for groceries.

At the point again we grabbed our rods and began exploring the rocky shoreline. I carefully picked my way across the green and pink slime to a position facing the incoming waves, placing large boulders between myself and the surf. Even so, it wasn’t enough to stop water from occasionally topping my waders. The dearth of other fishers was yet another sign stripers were not close to shore. It might have been the time of day but I was later told the fish were simply not there. The boulderfield dropping steeply from the light above me limited my backcast but I was able to get flies far enough out to keep it up for a short while. After losing several on the rocky bottom and finding an equal number of lures among the dark crevices nearby I cut my losses and continued exploring, my father taking on the role of guide as we rounded the corner on Turtle Cove.

There’s a painting of surfcasters on the cove that I keep on my laptop but the vast majority of those around us were without fishing rods, tourists in a more traditional sense. I spent some time testing the cove but there was nothing.

After lunch in town we visited the Montauk Information Center where an old timer sat in the wood stove-warmed interior speaking with the woman behind the counter.

When we asked about the fishing, they gave us the appropriate chamber line, pointing us toward charters and assuring us there were fish to be caught even from shore.

“I like to fish slack tide,” the man said as he rose to the idea that we would understand his humor. “Less work cleaning fish.”

After dinner back at the campground and a few more casts under a starry sky I slept. The next morning I tried the beach again, coming to grips with the idea that a miracle November blitz from a Montauk beach was unlikely. I was OK with that: less work cleaning fish.

We returned to the point one more time and walked to the North Bar, the location I associated most with my father’s stories. On a sunny late fall day with only a few other local yet casual anglers nearby it was far less intimidating than I had pictured it. My father explained how fishermen would wade out on the bar and cast to the edges on either side depending on which way the current was flowing. From the surface with little surf, it looked benign. I know an illusion when I see it.

Off the point several boats worked near a riotous scene of birds and fish. If we had been on a charter we would likely be tight to them but it was enough, for now, to just take the scene in. Still farther off I could see Block Island and the giant wind turbines spinning off its southern shore.

We headed home, talking about the future as we drove through the present and boarded a ferry into the past. The Cross Sound Ferry Cape Henlopen is a repurposed tank landing ship that had taken part in the D-Day invasion of Normandy 75 years ago. The ship’s upstairs lounge where we drank a beer and I ate a loaded Coney Island hotdog had recently been renovated into a museum dedicated to the ship’s history. Time had become elastic.

That was our trip to Montauk. We caught no fish. It was cold at times. Even in the offseason at a campground, it was pricey.

I can’t wait to go back.