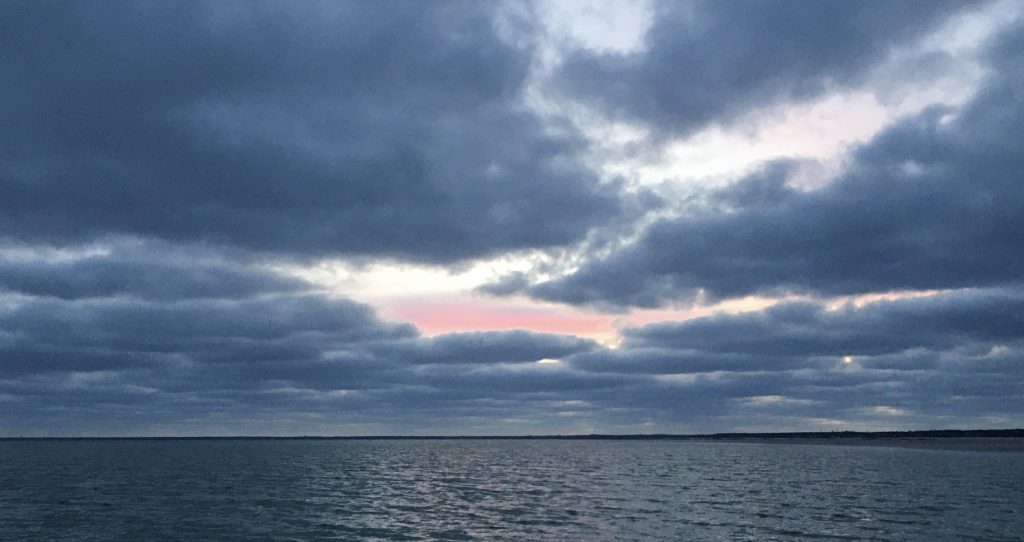 It happens every time I rise before dawn, pick up a rod and wander into the world.

But sometimes it means more than others.

I took the year’s first scouting trip on the flats in March, exploring a few ripples with a large black and purple muddler but mostly just absorbing the surroundings and making sure everything – including my cast – was in basic working order. I did so knowing full-well the likelihood of finding fish was low despite reports of herring, osprey and the yellow hints from wood- and leaf-bound daffodils and the forsythia that forms a fence along the northeast side of our property.

The air was a degree or two above freezing and the water was only another 10 degrees more but I woke early, donned several layers and set out across the flats shortly after 5:30 a.m. and low tide.

Land and watermarks re-established themselves in my mind as I splashed through alternately shallow and shallower water, listening for waking gulls and ducks in the fading darkness. Life was good.

The world had changed since the last time I walked the flats. It had, in fact, changed since the week before; it has changed even more dramatically since. We have all changed under a burden of shared responsibility unlike perhaps any since the last world war. Even then, the enemy remained primarily on the battlefield, rather than an invader and infector of our homes.  The damage done by the current global pandemic has been enormous. Families have been separated, lives – and good deaths – interrupted, and a collective gut punch has been dealt to the world’s economy.

I am lucky. My parents have been appropriately quarantined and the rest of our family is so far healthy. The suddenness of it all was nonetheless unsettling.

On that morning way back in March, however, there was the moment. The word can mean the smallest of things – just a moment – or the most significant; a moment in history. It can also mean simply a point in time when you see the world differently.

People who fish often see the world from a different angle. The vast majority of our neighbors don’t get up at 3:30 in the morning to hike through the dark to secluded beaches, bushwhack past prickers to dripping tidal creeks, or leave safe harbors miles behind for the open ocean or far flung flats. When you look back on the land, it is a view you often enjoy alone, a self-imposed and welcome isolation, the gift of perspective.

That unique lens provides space to see the world for what it is; changing, transitory, a temporal manifestation of form.

In March, as I looked to the east, scanning the water for swirls and the sky for birds, the clouds parted slightly and the sun, which had already cleared the horizon before becoming lost in the clouds, infused the space with a purplish pink hue. A moment became “the moment,” that early morning time when everything sinks into place, like the life beneath the sand flat as the tide drops.

In “Rising Tide Falling Star” author Philip Hoare – a swimmer by nature intimately familiar with the sea – wrote about a moment of his own.

“You remember some swims for no obvious reason. There’s some conjunction of conditions, of spirit and intuition; the realisation that a place is ready for you, and you are ready for it. That moment [emphasis added], the surrender of no-going back, the instant of transition, the leaving of one element for another. The sunny evening turned white and green.”

Hoare, like the many subjects of this writing, had submerged himself in the ocean. I submerge my feet and mind on the flats but try to avoid swimming. Looking up that morning I saw not white and green but rather the deep blue of moisture-laden clouds and the purple pink of refracted sunlight.

If enforced social distancing has taught me anything, it is a lesson already imparted by a prior instructor. Both social distancing and fishing remind us to savor each moment, whether it is the moment of reunion with loved ones, that period of early morning when possibilities are endless and the light just right, or the moment a bass turns on being released, its spine straightening as its powerful tail swings into action, kinetic motion born of the potential stilled only temporarily by hook and hand.

Fishing and the “new normal” we now face are about adaptation. Perhaps better than some others, anglers are ready for change. In fact, they thrive on it. Changing light, tides, weather, wind. All of it is a new opportunity as much as it is a new challenge. I look forward to both and live each day in anticipation of tomorrow’s moment.