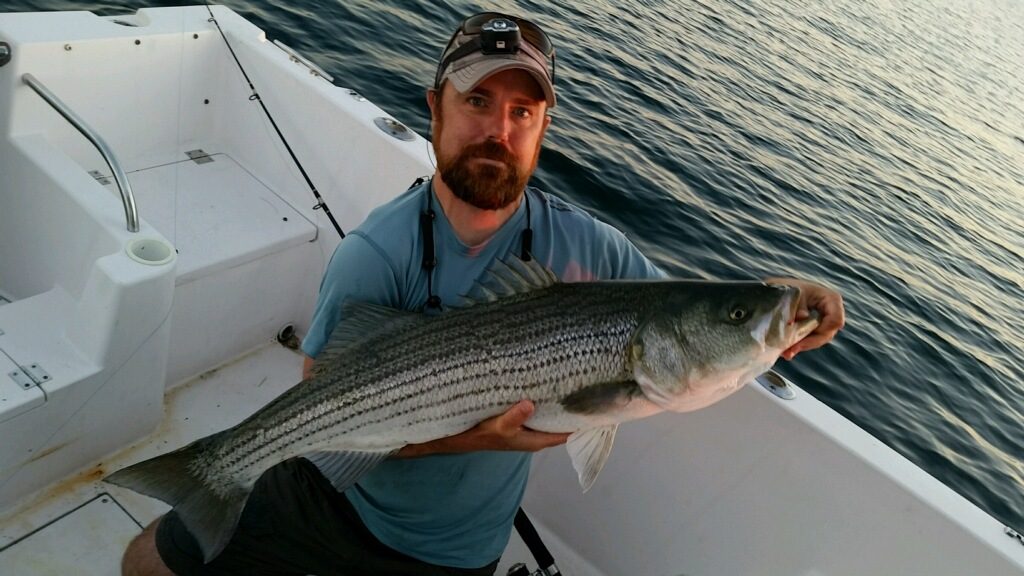 There have been a lot of developments in the striped bass fishery over the past several years: Adjustments in the stock assessment, terrible young-of-the-year survey results, and a change in regulations – it’s now a recreational slot limit of 28 to 34 inches coast-wide unless you live in a state where that rule is skirted using something called conservation equivalency – to name but a few. One of the other developments has been a drop off in commercial landings, including here in Massachusetts where a reduced quota has gone unmet for the past two years. Because of this, state regulators are considering whether to open the commercial season early this year. While this may give commercial boats a longer season, it isn’t necessarily a good idea for a fishery in trouble.

The commercial striped bass fishery in Massachusetts is small compared to the recreational fishery but it all goes to the same bottomline. Those recreational 28- to 34-inch fish become the 35-inch plus fish available to the commercial sector and large breeders are the engine that keeps the whole population stable. This isn’t an us versus them situation. We’re all in the same boat. Fewer fish means fewer pounds harvested in the commercial sector and fewer targets for recreational anglers. If you fish for striped bass in either sector you can make your voice heard on this issue and make a difference. It’s easy. All you have to do is send an email with a few sentences to Massachusetts fisheries officials saying you believe the commercial season opening should be kept at June 23. Comments must be submitted by March 16, either by email or mail. I’m happy to help anyone looking to write something up or who just wants more information but you should make it your own because your experience matters. Whatever you write doesn’t have to be long. You can also share this with your friends to spread the word. If you can, attend one of the public hearings this week. More information, including the hearing schedule and how to comment, can be found here: https://www.mass.gov/doc/020720-winter-omnibus-public-hearing/download?utm_medium=email&utm_source=govdelivery

I am writing to comment on proposed changes to the commercial and recreational fishing limits to be implemented during the spring of 2020. I reserve additional comments for the scheduled public hearings and will focus here on one of the proposals: the move to open the commercial season for striped bass from June 23 to as early as June 1.

I respectfully oppose such a change for the following reasons.

I have been fishing around Cape Cod for 30 years and recently transitioned to doing so for a living as a guide, primarily focused on fly fishing for striped bass and bluefish from our inshore waters. As you know, both species are overfished and overfishing of striped bass is occurring. While I applaud some of the recent changes intended to reduce the harvest of bluefish in light of its overfished status, management decisions in connection with striped bass by the Atlantic States Marine Fisheries Commission, including allowing states to circumvent the commission’s best intentions through the misapplication of conservation equivalency, have been far less reassuring. In light of the fact that a slot limit for the stock is new and as of yet unproven a precautionary approach to interrelated state level decisions is warranted.

I recently attended a workshop about fisheries science sponsored by the Gulf of Maine Research Institute at which National Marine Fisheries Service scientists actively participated and I am generally confident in the science used to arrive at the latest stock assessment. Not only does the striped bass stock assessment point to a fishery in peril if appropriate action isn’t taken, the facts on the ground support the same concern, including commercial striped bass landings.

In 2019, the commercial sector in Massachusetts landed only 67 percent of its quota, a continuation of what appears to be a change of course that started the year before when 89 percent of the quota was landed. In each of the previous 13 years listed on the division’s website, the quota was either exceeded or nearly met in full, reflecting the improved health of the fishery after the dark days of the 1980s and, presumably, efforts to properly manage the stock across all sectors. That work has clearly fallen off or failed to keep up with environmental conditions and effort, and both the commercial and recreational sectors have suffered for it, as have the fish.

That being the case, everyone needs to do their part to help bring the fishery back before it approaches the brink yet again. In my business I have changed to a strict catch and release policy for striped bass. While I understand that catch and release mortality is a point of concern, I plan to use the opportunity to educate clients on the proper handling of fish and the facts – good and bad – about catch and release. I am also redoubling my efforts to use the proper equipment to land fish quickly, keep them in the water whenever possible and use only single, barbless hooks for both fly fishing and light tackle clients. The more fish that go back into the water, the more will survive in absolute numbers, even if the catch and release mortality rate increases.

Because I know the outsized role of the recreational sector in harvest through either landings or catch and release mortality, I don’t fault the commercial sector for the current state of the fishery. Far from it. I do, however, have concerns with any potential expansion or the full realization of any sector’s effect on the stock at this particular and crucial point in time. This includes not only the early opening of the commercial season but also the issuance of commercial licenses in an as-of-yet unlimited entry fishery, the unrealized potential of those licenses already issued (especially in light of the recent correction in world markets and the potential ripple effect on local economies) and the effect of recreational harvest – both legal and illegal – at places like the Cape Cod Canal. The true commercial fishers I know are extremely efficient and, if the fish are available, they will find them. The fish aren’t there for a reason, and simply widening the window of opportunity won’t change that. In fact, it will likely exacerbate scarcity by putting additional pressure on the large fish the recreational slot limit was intended to protect, especially with decisions made by other states to effectively expand that slot depending on which side of the border you are fishing from. With all these concerns in play, this is not the time to open the commercial striped bass season early in Massachusetts. Keep it at June 23 and continue to focus on educating anglers about the new rules. I know fishermen who have only learned of the slot limit when I’ve told them and I’m sure there are plenty of others who remain unaware of the changes and who will still be unaware when they hook their first fish of the season.

Whilte other states have taken different approaches to striped bass management, Massachusetts has led the way in attempting to protect the future of the fishery. This includes the early implementation of circle hook regulations, efforts to close loopholes in shore-based commercial fishing that had helped fuel problems along the canal, and the recent letter you and Raymond Kane sent to Rhode Island officials urging them to reconsider their conservation equivalency proposal. Your efforts in your role on the ASMFC have also not gone unnoticed. Thank you. Managing a coastwise stock is never going to be easy. And, while Massachusetts has led in many respects, other states have not been so quick to recognize the role they must play in improving the situation. Rebuilding the stock will take years, longer still because of decisions beyond our control and our borders. Taking this action would be a step backward at a time when we are already falling behind. Please continue pushing forward.

Thank you for your time and feel free to contact me if you have any questions.