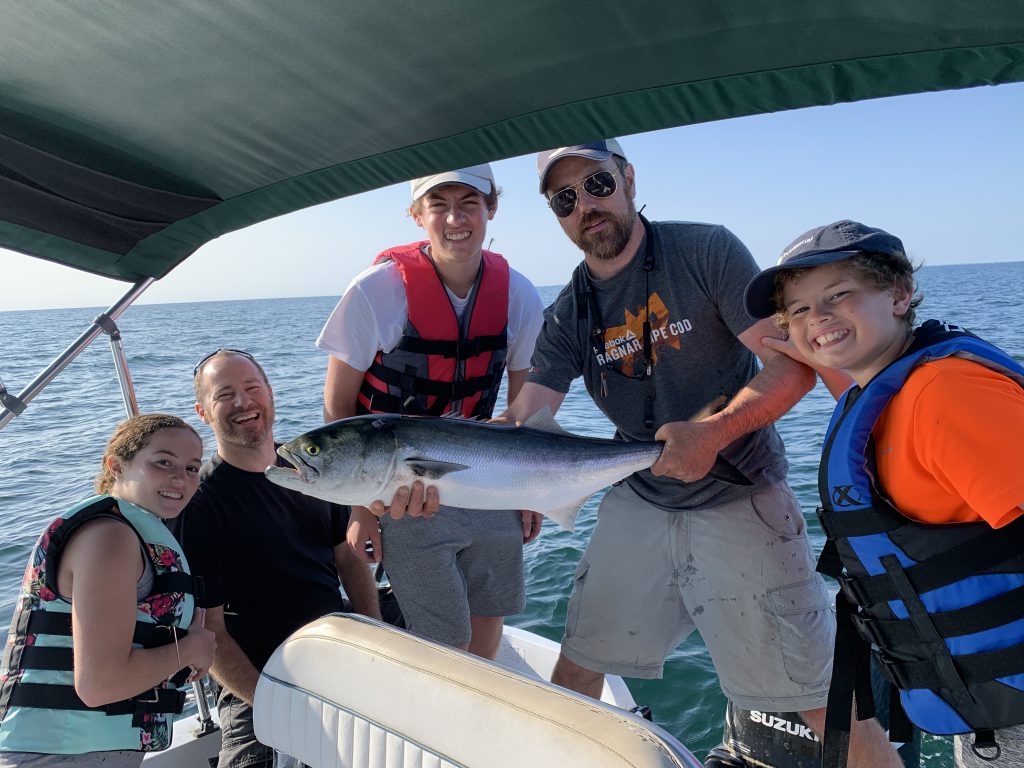 “.. and there the murderous bluefish, undismayed by imminent death, glares fiercely and snaps his savage jaws to the last.” – Theodore Lyman, Massachusetts Commissioner of Inland Fish and Game describing weir fishing in Vineyard Sound

When I first started fishing on Cape Cod, it was bluefish runs at the Provincetown jetty that got my blood pumping.

We started coming to our fall fish camp in the artsy, gay-friendly fishing community in the late 1980s; we would hike the jetty to fish for stripers on the outer beaches, including a spot we call Striper Corner, and at Long Point but the arrival of the blues on high tide was where most of the action was at the time.

The trip would start with a check of the jetty for blood on the rocks, a sign of other fishers’ successes. We would have already nailed down the right time to be there and, if it was daylight on a rising tide, the visual was spectacular.

With autumnal views of Provincetown to our northeast, we would hike to the spot on the jetty we had determined was best and start casting. Small stripers would come in first on the tide so we might start leaderless. If there wasn’t wire on the end of our lines quick enough, however, we would pay for it eventually.

It might start with a rod farther out on the jetty bending and then, like dominoes, tips would drop toward the water as poppers and Kastmasters were snatched in snapping jaws belonging not to stripers but to their slice-and-dice alter ego, the bluefish. And, just like that, the rods not prepared with leader would jump back toward the sky, lureless. It wasn’t that the first fish had somehow eaten its way past the lure and cut the line or wrapped it around a sharp rock, it was the other bluefish trying their best to steal the prize away from their brethren, chopping through any line tight in the water column.

Since then, bluefish have always shared a place with stripers as my favorite fish. The two species are opposite sides of the same coin rolling up the East Coast each season, coming in separate but sometimes combined waves, somehow sharing the roiled surf, shallow bays and deep ocean with each other despite very different persona.

Stripers are refined and, though powerful, seemingly gentle when brought eye to eye. A boxer if you will, a slugger but one that throws its punches in the ring, playing mostly by agreed-upon rules. They swallow their prey whole and thus from the front so as to avoid damage from erect spines facing the wrong way. Conversely, bluefish slash and cut from behind, bringing a mouth of knives and a street fighter’s attitude. They eat on the go and leave what they don’t get in the first bite. The cleanup crew is on it. But other than eating whatever is in front of them, there are no rules. Both hug the coast at times, but are equally at home in deeper waters.

I’ve enjoyed a Nantucket sleigh ride in a canoe towed behind a hooked bluefish, seen lifeguards call swimmers out of the water off a New Jersey beach as marauding schools swam by for fear a toe might be taken, and chased them with a fly rod, a fight that includes the dramatic leaps and shaking head that striped bass rarely exhibit, more reminiscent of tarpon and other gamefish. I’ve also seen a shark take a bluefish in a standing wave off Monomoy and massive feeds from a boat off Provincetown with birds and bluefish seemingly changing places with each other, at least temporarily, in confused seas.

And, despite those early lessons in Provincetown, I often try first to go without a leader and can usually bring them in without losing the fly. For one thing, that line of fish we used to see along the jetty are usually more scattered and peripatetic in other areas and, so long as you get them in quickly, a fly does not provide so enticing a target when nearly swallowed as a lure might for other bluefish.

But, in recent years, bluefish in large numbers and size have been scarce around Cape Cod. It’s not that they haven’t been here at all, but most people who care agree the numbers visiting our area had diminished. We haven’t seen them at the jetty on that fall trip in more than five years.

I’m happy to say they appear to have returned, at least elsewhere around the Cape. Large bluefish, even some of the truly big ones known as gators, have shown up in Cape Cod Bay and off Monomoy. There were good signs early when bluefish were caught in the spring off places like West Dennis Beach but the numbers have skyrocketed in the past several weeks.

And, they are big, small and every size in between. Snappers, tailors, choppers, gators, all of the above.

Large schools of small bluefish have shown up west of Monomoy, making for fun if sometimes frustrating targets on the fly. Unlike bluefish in many other cases, these fish were either too well-fed or there for some other reason, and were initially more difficult to entice than is typical. My uncle once put a hook on a plastic coke bottle and caught a bluefish. They will bite pretty much anything. But these small fish took some coaxing and a popper fly – feels like cheating with a bluefish – to convince when I first ran into them a week ago.

Earlier this month, Nick Mayer of Predator Fly Gear had hooked a surprise bluefish while we were wading for stripers on the flats. With a couple clients onboard this past Friday, we were able to hook up with one on a deceiver in the same area and they chased pretty much whatever we got in front of them.

The day before, my father and I had taken an old friend and his children out to Cape Cod Bay. We were late getting out and had to get back in for dinner so it was going to be a quick trip one way or another. After we found the fleet, each of the children took a turn as we trolled off the stern. Within a half hour, each had hooked and landed a bluefish, including a couple biggies. We reeled in and made it home well in time for a chicken dinner.

One of Friday’s clients also landed a large blue, about the same length as the 31-inch striper he caught a short time later near the same ball of swirling fish that appeared to be on a school of menhaden.

On Sunday, I went farther offshore and, although, we didn’t get them to take a fly, we landed several 30-plus inch bluefish to 10 pounds and lost one that sounded like a true monster as line peeled off the reel before the fish – which grows larger by the day – shook loose.

So now the goal is landing more of the big ones on the fly. I’m looking forward to getting back out there and would love to get someone else who has never enjoyed the thrill hooked up on one of these ferocious fish. I’m often struck by the idea that once you get them in the boat, it feels like their yellow eyes are sizing you up. I can’t help think that they think they have me right where they want me. Unlike stripers there’s no lipping bluefish with your hand. It would be stupid and painful given the tendency of bluefish to, as Lyman so eloquently phrased it, “…snap his savage jaws to the last.”

Seeing them is good though, like a visit from old friends.