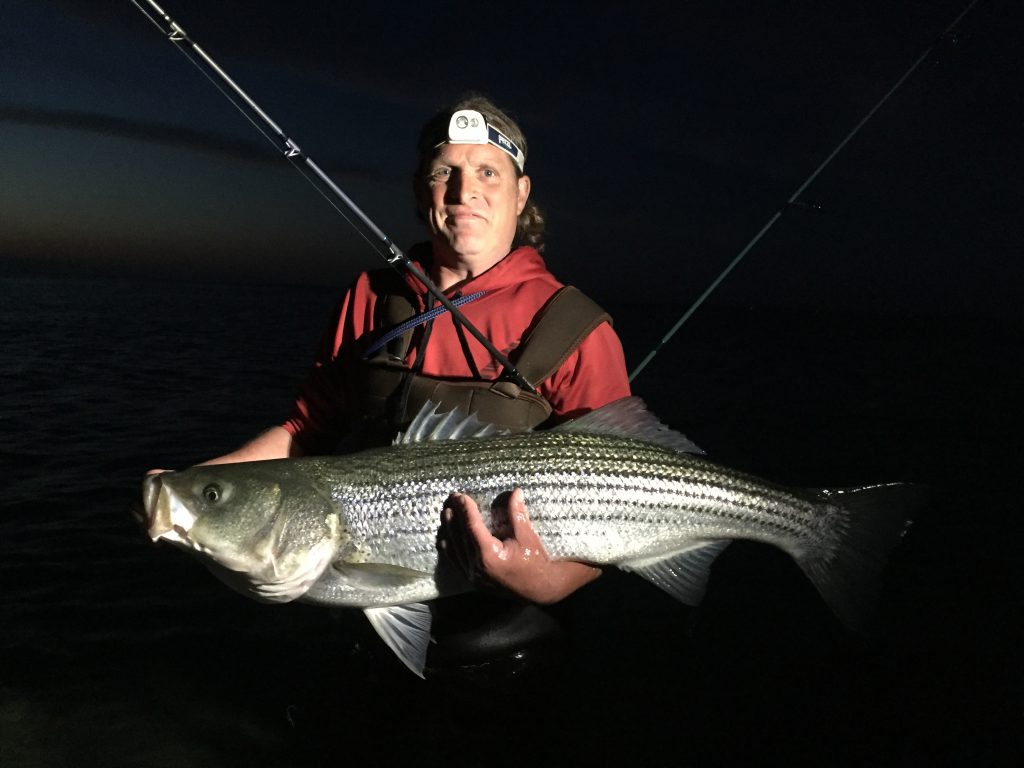 I was never a tournament guy.

Don’t get me wrong. I liked the idea and have been in a few; the Cheeky and the now-defunct Harwich Headhunt come to mind. But I think I look at it the same way I look at running and road races: There’s only so much time and while fishing and running are both things I’ll do whenever I get the chance, in the past both have been done when other demands – namely 14- to 16-hour workdays – permitted. That may have changed, at least with fishing.

This past weekend, I spent most of my days and one long night waist deep trying to get a fish big enough to measure for the South Shore Striper Tournament. The tournament, which started Friday and ran through Sunday, included a fly fishing division for the first time. I threw my lot in not only as a competitor but also as a sponsor, a blatant shill for the new business but also for a good cause, the North and South Rivers Watershed Association.

After a trip Friday afternoon to Bear’s Den in Taunton to talk strategy, pick up tourney packages and meet a few new faces, we headed for the Cape and, with the sun going down, walked out on the flats. The sunset was one of those fire and brimstone types that quickly lights up social media where it continues to burn for several days.

I had been in the same spot at 4:30 that morning as it started to rise and had brought in a few schoolies in the 18- to 20-inch range. Nothing big but the hope was nightfall would bring in larger fish, a theory that would prove out for at least one in our group.

At night and in the early morning hours, I rely quite a bit on a black and purple muddler fly the fish dig and it is one of those that I’ve been able to keep for an inordinate amount of time, whereas some new flies don’t stand the test of a day. This beat up muddler, however, had caught more than its fair share of fish and continued to do so as the afterglow of sunset lit the horizon and my retrieve slowed.

First a small fish and then one a bit bigger, with the fly almost on a dead stop. Hopes were high the shift over low tide would draw in their beefier brethren. The call came a short time later from my right.

I had met Jared that morning on the flats. He had been fishing since 12:30 a.m. and had to head off to work empty-handed before I got into my morning fish. He was about to make up for it.

“It’s a cow,” he said, narrating just enough so we knew he wasn’t exaggerating.

After a 10-minute fight, Jared got the fish to hand and posed for a photo (credit to Kevin Blythe for a stellar image) I didn’t see until later. It was a beaut, estimated at 35 pounds, but Jared – who was fishing live eel on new Loomis rods he had just picked up – wasn’t in the tournament. Still, it gave us fly fishermen hope that our black eel-like flies might just do the trick. It was Jared’s first fish of the season and he was fishing the area for the first time in years, so everyone was happy for him. Even better, he let her swim back into the dark dreamscape around us after the image and memory was made.

We kept going, fishing a small creek on another section of the flats until dawn with about another half dozen fish caught but all of them micro to schoolie size; Davids to Jared’s Goliath. After a few hours sleep and a tackle check, it was off to points north where we hiked and fished a bayside beach for several hours, dropping flies in holes and wandering into rips under a promising aerial assault or screaming terns plucking silver bait fish from the water and fighting for their prize overhead. The area looked destined to hold fish but, once again, other than a few smalls, there was nothing. Micros or “dinks” became a theme for most of the fly fishermen in the tournament.

Legs and brains aching, we headed back at dark, vowing to rise early and catch them Sunday on the flats but despite ideal sight fishing conditions, we saw mostly turtles which, while interesting, did our chances at making the leaderboard no good. The winner in the fly fishing category was a measly 30½ -inch fish – no offense to either the fish or the fisher as it was still the winner – but certainly attainable during any other three-day stretch. The prize money, however, was a secondary consideration. That sunset; the next day’s dawn; moving water; and meeting, learning and sharing time with old and new friends was, as they say in the credit card commercials, priceless.

And, so now I may be a tournament guy. Or, I may just go fishing.

For more on the outcome of the tournament and the North and South Rivers Watershed Association, click here.